Innovation in resin-infused, composite wind blade technology can be costly and time-intensive — typical time to market for new blade designs is reported at 16-20 months, with costs upward of $10 million, largely due to the development and purchase of dedicated tooling.

Additive manufacturing (AM) technologies, either for faster and less costly tooling development or for toolless manufacture of blade components themselves, could be an enabling solution for next-generation wind blade innovations. Several research efforts over the past several years have demonstrated the potential of AM in the wind market, such as an Oak Ridge National Laboratory-led (ORNL, Oak Ridge, Tenn., U.S.) project in 2017 that resulted in a 50-foot-long, eight-piece composite blade mold. Also in 2017, the National Renewable Energy Laboratory (NREL, Golden, Colo., U.S.) opened its Composites Manufacturing Education and Technology (CoMET) facility, which works with the Institute for Advanced Composites Manufacturing Innovation (IACMI, Knoxville, Tenn., U.S.) and other partners on research initiatives including 3D-printed segmented tooling for wind blade manufacture.

Over the next two years, UMaine and its partners will work toward the development of 3D-printed, 17-meter-long mold segments manufactured for the infusion of a 120-meter-long rotor blade. Two mold segments will be printed, and part of the research includes development of a joining method to assemble the final mold. The mold sections will be printed on UMaine’s large-format 3D printer, which prints up to 150 pounds of material per hour, with industry partners contributing materials knowledge and wind blade manufacturing and design expertise. ORNL is also contributing specially developed 3D-printed heating elements that will be robotically deposited into the mold for mold surface temperature control.

The goal of this program is to use 3D printing to both accelerate blade time-to-market and reduce the costs for new blade development, with target reductions of six months and 25-50% lower tooling cost, respectively. According to Dr. Habib Dagher, founding executive director at UMaine ASCC, another key aspect is the development and use of a 100% recyclable, bio-based thermoplastic polymer reinforced with wood fiber. This material is said to produce required mechanical properties, but is less expensive than carbon fiber-reinforced ABS thermoplastic feedstock (less than $2 per pound in large volumes, compared to $5 per pound for CF/ABS).

Ultimately, Dagher says, the goal is to extend the work toward 3D printing some components of end-use blades themselves to reduce the use of molds altogether. Material developments are currently underway and he anticipates that UMaine will be able to begin working on a prototype blade component within the next two years.

Aiming to solve transportation issues for large (more than 100 meter-long) onshore and offshore blades, Orbital Composites intends to demonstrate that its mobile robot platform can lead to more than 25% increased throughput speeds and reduced labor compared to 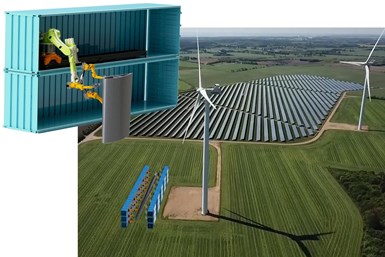 A team including Orbital Composites, ORNL and UMaine is aiming to not only advance the use of composite 3D printing to manufacture rotor blade components, but to solve challenges in manufacturing and transportation of increasingly larger wind blades by using on-site, containerized robotic 3D printers. Photo Credit: Orbital Composites

conventional blade manufacturing processes, as well as a more than 50% reduction in new blade design lead times. UMaine will also be incorporating its Offshore Wind Lab to test the wind blade’s strength and fatigue aging of the AM blades, as well as how well they survive lightning strikes.

In addition, a collaboration of GE business units — GE Research (Niskayuna, N.Y., U.S.), GE Renewable Energy (Paris, France) and LM Wind Power (Kolding, Denmark) — is also working with the U.S. DOE on a project announced January 2021 for the design and manufacture of 3D-printed rotor blade tips, with a focus on low-cost reinforced thermoplastics. The 25-month, $6.7 million project will involve partners ORNL and the NREL.

The goal of the project is to deliver a full-size blade tip demonstrator for structural testing, as well as three blade tips to be installed on a wind turbine. According to GE, the project will reduce manufacturing costs, increase supply chain flexibility, and provide lighter-weight blades made with more recyclable materials — with an overall aim of advancing the competitiveness of onshore and offshore wind energy when commercialized. Another goal is to reduce design cycle time to potentially enable wind farms to more efficiently produce energy and thus reduce wind’s levelized cost of energy (LCOE).