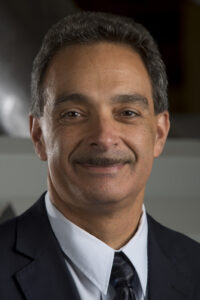 Dr. Dagher is the founding Executive Director of the University of Maine’s Advanced Structures and Composites Center (ASCC).  Under his leadership, the Center has grown from 4 to over 260 personnel and is now housed in a 100,000 ft2 laboratory, the largest university-based research center in Maine. Dr. Dagher is a world-leading advocate for developing sustainable infrastructure and energy systems that simultaneously optimize structures, materials, manufacturing, construction, and maintenance. Dr. Dagher initiated a number of major research programs which have gained ASCC national and international reputation, such as:

The large-scale bio-based additive manufacturing program in which the largest polymer 3D printer in the world was installed, earned 3 Guinness World Records including for 3Dirigo, the largest 3D printed boat in the world in 2019.

Floating offshore wind technology research program to address the state’s and nation’s energy transformation. He assembled and led a team that deployed the VolturnUS 1:8, the first grid-connected offshore wind turbine in the United States.  The success of the technology led to over 70 patents, a further $150 million investment from the US DOE and two of the world’s largest offshore wind developers. He led development of unique research facilities including the Alfond W2 Wave-Wind basin, the first US ocean engineering basin combining a high-quality wind machine with a wave basin to develop floating wind technology and the second-largest wind blade testing facility in the US.

Transportation Infrastructure Durability Center to address the nation’s crumbling roads and bridges. Funded by the US DOT, it brings together the New England State DOTs and Universities to develop more sustainable materials and construction methods. Some bridge technologies developed at ASCC include  The “Bridge-in-a-Backpack” technology, which are inflatable composite arch bridges that are approved in the AASHTO bridge Code and have been spun off into a growing private business. The longest composite materials highway bridge in the US, a 540ft girder bridge in Maine, in cooperation with the Maine DOT.

Other composite technologies include The Modular Ballistic Protection System (MBPS), the first such technology to be approved and fielded by the US Army to protect troops in tents from the blast and ballistic threats, and The longest carbon-fiber composite vessel built for the US Navy, an 83ft long high-speed interceptor.

Dr. Dagher at the ASCC ground breaking in 1998.

Dr. Dagher with Senators Susan Collins and Angus King at the launch of Volturnus 1:8 in 2013.

Dr. Dagher with Senator Susan Collins and Ken Sweeny from AIT Bridges (an ASCC spinoff company), at the dedication of the Grist Mill Bridge in Hampden, Maine, in 2021.